This is my version of a ‘how to do it’ post about riding the Canning Stock Route.  Scott’s version also covers a lot of similar ground, but some different – use them together, with a comparison of ‘takes’ useful? 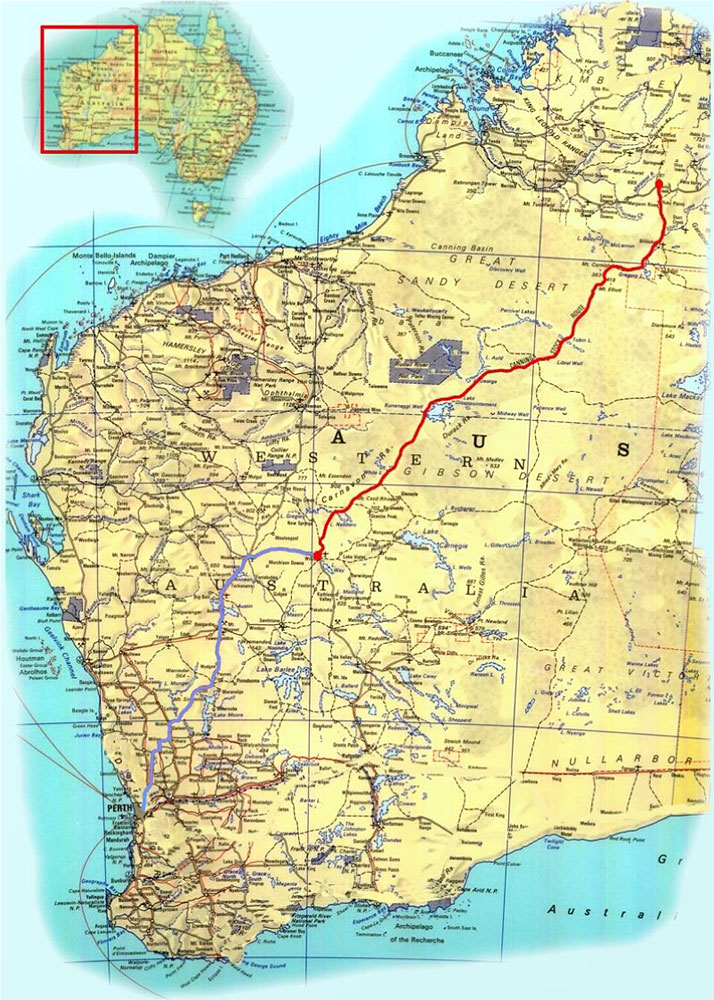 The Canning Stock Route is just over 1600km from Wiluna to Billiluna – the stretch from there to Hall’s Creek on the main highway is on the Tanami track.  Descriptions are based on the 51 wells dug by Canning’s team plus a few other features.  Apart from 40km or so of graded dirt road at either end, you’ve just got two-track to follow.  In terms of ‘difficulty’, the meat is in the middle.  In our south-north direction we had relatively easy and fast going (barring corrugations) until well 11 when the sand hills began.  Even then, we didn’t find our pace slowed significantly.  The harder work really beginning to bite a day or two after Durba Springs (500km or so into the route).  The biggest and most sustained dunes were between wells 26 to 31, and wells 39 to 45 (particularly 41-45).  The dunes are pretty much done by well 45 and gone after well 47, though soft corrugations continue to demoralise until after well 51.  We think we rode about half the dunes (including many of the biggest ones).  Those that we didn’t ‘clear’, we rode as far up as we could; and always rode down (the best bit).

Successful clearance was partly dependant on temperature (the sand got looser after 10-11am), but also on the skills of the most recent 4WDers and the quality of the track they left.

Corrugations were a feature throughout, but particularly in between the highest dunes (see above) and in wrist-numbing continuity from wells 31 to 35.  Riding these was always possible – with varying levels of cursing.

The greater precedent lies with a North-South unsupported ride.  The extensive body of advice for 4WDers available on the internet and most of the 4WDers we met felt that it was an easier drive this way – with less traffic and steeper and more compacted dune ascents.  In it’s favour with regard to unsupported cycling, this direction allows the hardest dunes (45-41) to be passed while still relatively fresh; and a longer ‘tail’ of easier riding.  We found that a less steep approach to the dunes, combined with our mountain-biking backgrounds, meant that we stayed in the saddle all the way over c.50% and got pretty close with most of the rest.  It’s difficult to tell how it would have been for us in the other direction – but certainly no better, with a significant number of dunes looking as if they would be pretty hard to push, never mind ride.

The other aspect to our direction choice was the recent heavy rains that repulsed the other attempt this year.  We felt that if the weather turned ‘bad’ on us as well, we would get to ride more of the route before being stopped by suddenly replete lakes (e.g. Tobin Lake) and have an escape route that didn’t require us to back-track the entire ride to that point (via Wapet Road from Kunawaritji).  Although not at all set-up to cater for our specialised needs, the store at Kunawaritji can allow some opportunity for ‘topping up’ supplies.  We bought more Nutella and Peanut Butter, and a couple of days’ fresh fruit.  They also have showers and a payphone (the only non-satellite communication on the CSR).  En fin, we certainly didn’t suffer due to our directional decision, and may well have done better that way.

Navigation is mostly a matter of following the track and using a map.  We used the Hema Maps. 6th Edition Western Sheet, Great Desert Tracks.  Our only false starts were where the exit track from a well was obscurred by multiple converging 4WD tyre tracks.  Well 31 was a particularly good example of this.  Both of us used GPS as back-up, to record daily distances and measure out our 5km regroups.  GPX track files I recorded can be made available on application (with the usual caveats).

The land that the CSR passes through requires 2 permits: the Martu (wells 16-39) and Australian National 4WD Council.  While we were at Durba Springs we met a party of Martu Rangers doing preparatory work to allow re-introduction of Rock Wallabies to the area.

Other than carrying enough food to last the distance, the water along the CSR is one of the most important things to get right.

Only some of the original 51 wells plus other water sources remain useful to unsupported cyclists.  Our Hema map was mostly accurate – tending to err on the side of caution.  All wells described as ‘restored’ or with a ‘tap’ symbol were fine.  We actually used the majority of well water un-filtered with a couple of exceptions.  This table was the water situation as we found it in July/August 2013 and is only a guide.

Despite not filtering most of the well-water, I don’t regret carrying a filter (MSR Miniworks EX).  In hindsight, we could have managed with one between us, rather than one each.  Taste-wise, we found the water from wells 6, 15, Georgia Bore, 33, 46 and 49 really nice.  Well 36 had a dead camel removed from it in 2011 – we weren’t sure whether it had recovered, so chose to use well 38 instead as we knew from others that there was water in it.  Well 41 had a persistent clay sediment, but tasted fine.

Our daily water requirements increased markedly from the cooler southern end (Wiluna to Durba Springs) to the properly hot northern section (well 40 onwards).  Travelling south-north meant we were carrying the biggest water volumes/day when we had the last food left.  I used 7-8 litres of drinking water/day from well 40 onwards, with another 1.25L/day for dinner/breakfast preparation; whereas until Durba Springs I was only drinking 3-4L/day.  Our 70km/day pace meant we could optimise water carriage and intake so as not to carry any more than needed.  To emphasise – the more you carry, the slower you go – aim for the happy medium (with a safety margin).  The result, for us, was that though we had a 40L capacity each, we never carried more than about 25L.  I had a 2L Camelbak plus 1.5L Nalgene bottle (setup for well-bucket use with a string loop cable-tied to the neck) for day-water.

As with water, there’s a balance between too much slowing you down and carrying enough to fuel a decent pace.  We opted to carry food for 35 days based on the slowest passage (33 days) with a couple of days to spare.  We never actually weighed it all, but estimate it to be about 20kg each.

Once we had a good feel for how fast we were moving over the harder terrain, we upped our intake to keep up with our seemingly bottomless stomachs.  In Kunawaritji we laid everything out and increased the rations further, while keeping a 3 day buffer for safety.

We opted to carry a stove/fuel for safety in the event of injury or bad weather.  Although we could have managed without it entirely (in retrospect), it was a good morale boost after a bad day with a fuel-poor camp to have it as an easy option.  We finished the route with half our fuel left.  As already described cooking on a camp-fire was often the best part of the day.

I’ve already described the photography-related electronic issues, but will summarise them here too.

Minimal and simple – it succeeded, with leeway for poor weather.  Both of us are agreed – padded cycle shorts make corrugation-induced saddle impacts better.  I also am glad I wore cycle gloves as a lot of the trail-side brush is impossible to avoid.  Better the gloves than my skin!