A two-week Middle Eastern bike tour, born not from dreaming or desire but as an accident of timing: a course, voluntary unemployment and dates for cheap flights collide and challenge me to live my belief that sometimes it’s better to take the adventure the world throws your way than the one you’ve deliberately chosen.

Highways hard to avoid entirely with poor maps and poorer (ie. non-existent) language skills – so I concentrate more on the places I’d like to visit, concoct a list that runs something like: Dead Sea, Wadi Mujib Nature Reserve, Karak castle, Dana Nature Reserve, Petra, Wadi Rum, Aqaba. It’s an OK plan, but I’m not sure there’s a truly fabulous way to join the dots.

So conspicuous, single white female on a bicycle in a land where there are few women out in the streets. Shouts of “Hello! How are you?”, hands in the street that grab, “Photo! photo!”, tourist mark-up on a simple cup of coffee, cheap and nasty hotel rooms with the door firmly locked on the inside. And there’s kindness too; endless cups of too-sweet tea, “Welcome!” given freely with no expected return, hands waved horns beeped in encouragement, offers of lifts, my so-small portion of bread from the bakery given for free.

Conversation with travellers, surely we’re all bored of it, there’s only the one: where are you from/ where have you been/ where did you stay/ was it nice/ where are you going next/ how long are you here. And in my case, the added: what bike are you riding/ did you buy it here or bring it/ how far do you ride each day/ do you feel safe. I’ve no interest in this conversation, surely no-one has, yet we have it anyway.

Cycle tourist? … No … I don’t think I am or ever was a cycle “tourist” at all. I don’t think I even like travel/tourism. I’m more… I don’t know… a long-distance walker/mountain biker maybe? For me it’s always been about getting into the wilderness, away from people – it’s about beautiful remote routes, wild camping places not this hustle of jostling against too much humanity. I like people, truly I do – but generally I like them one at a time, and I have no gift for small talk.

I want to be invisible, that’s what it is, maybe I’m someone doing something a bit different but I’m uncomfortable with the attention it brings me. I just want to have the adventure, not talk about it… (ok, maybe write about it, a bit, sometimes…)

In the end my route works out better than I hoped for. Sure there are some dusty, littered, heavily trafficked sections of struggling through urban sprawl, but beyond this the road opens out to desert, rock formations, cliffs, canyons, sometimes breathtaking, often spectacular. These are the best times, the freedom and independence of an open road, camping out in the desert under myriads of stars.

Moments, precious moments of being in just the right space and place, these are what we live for and they come, daily they do come. But daily, too, comes a choking on homesickness, a heartfelt desire to be elsewhere…. and a new and growing understanding that for me, home is not a place but a person.

Storm clouds gather over the Dead Sea. Anyone who has ever been cycle touring will recognize this as a not-to-be-missed camping opportunity! I am checked out by a couple of local officers, who ensure I intend to leave in the morning, ask if I am scared – and leave me to get on with it.

Sunset over the Dead Sea.

Despite my fears of “too much tarmac” on my intended route, even the King’s Highway opens out into beautiful stretches of empty desert, lifting my spirits as it does so. 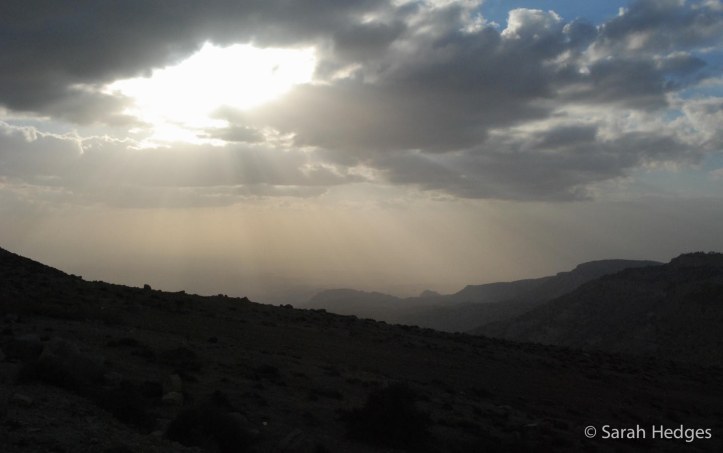 …where I take a day off the bike… 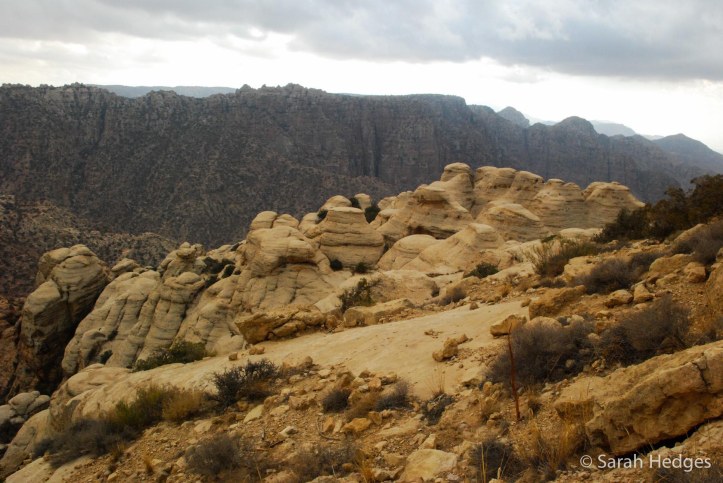 …and go hiking instead. 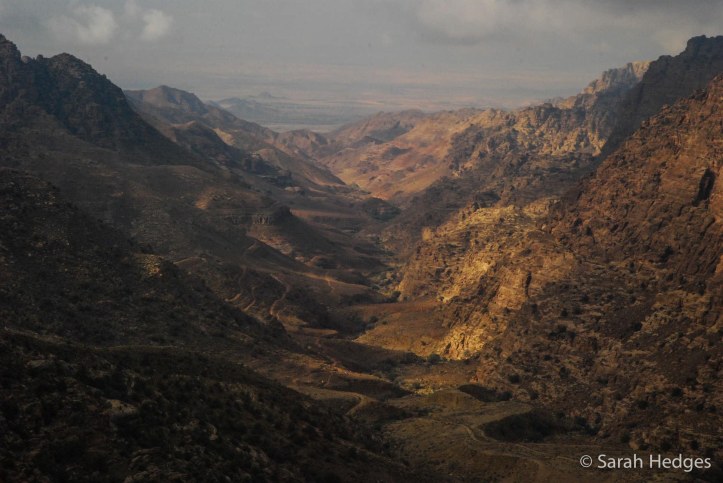 That’s more like it! My route from Dana Village to Feynan Ecolodge is more usually recommended as a 5-hr hike. Joe Cruz advises me that it’s probably easier to seek forgiveness than permission about riding it.

I follow his advice, and am rewarded with the nicest bit of dirt road riding I manage to find all trip. No-one seems to mind that I am riding it – in fact they seem impressed and delighted.

The trail takes its toll, however, and it’s while stopping to fix a puncture at lunchtime that I discover all of the glue has leaked out in my repair kit! I swap in my spare inner tube and later attempt fixing the holes with superglue – the only thing I can find locally. It is not a success. Well, what would you do?

I treat myself to a night at Feynan Ecolodge – way above my usual budget, but with it’s candlelight and fabulous vegetarian food, very nice indeed. 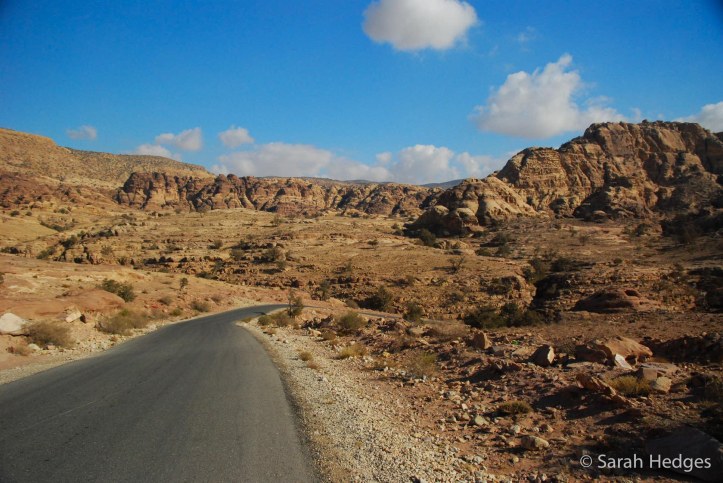 Staying at Feynan sets me up nicely for a delightful back road to Petra – sections of it freshly paved, but virtually traffic free.

For a small country, Jordan punches above it’s weight in stiff climbs – and this is another. I’m climbing for hours, it’s hot and I’m short on water. 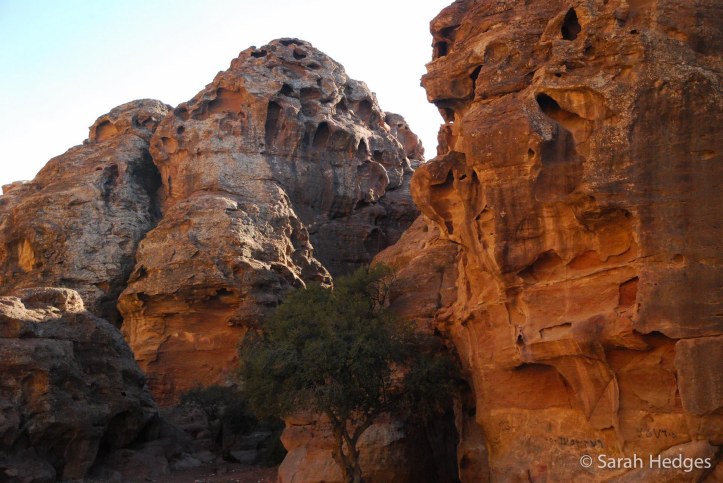 The following day, I don’t go to Petra at all (I’ve been before)…. 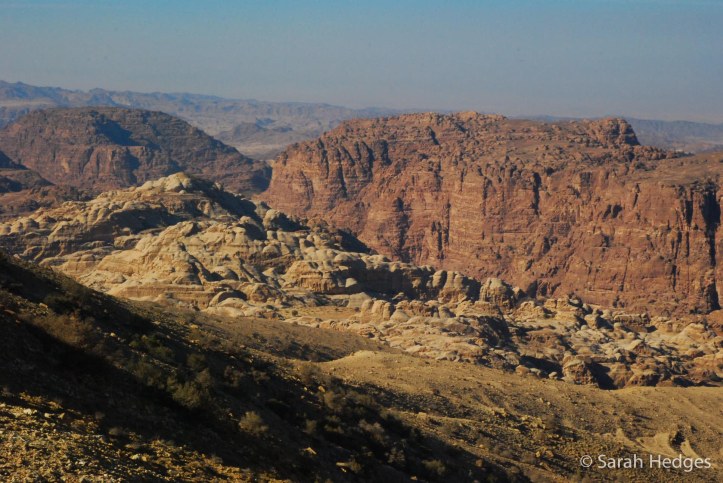 …riding on instead from Wadi Musa….

…to Wadi Rum, where I wild camp in the desert.

The next day, I am meant to be meeting Canadian Susan, a friend from the Permaculture Design Certificate, at the Wadi Rum Visitor’s Centre. I arrive way too early…

It’s a tough place to have to wait around in. 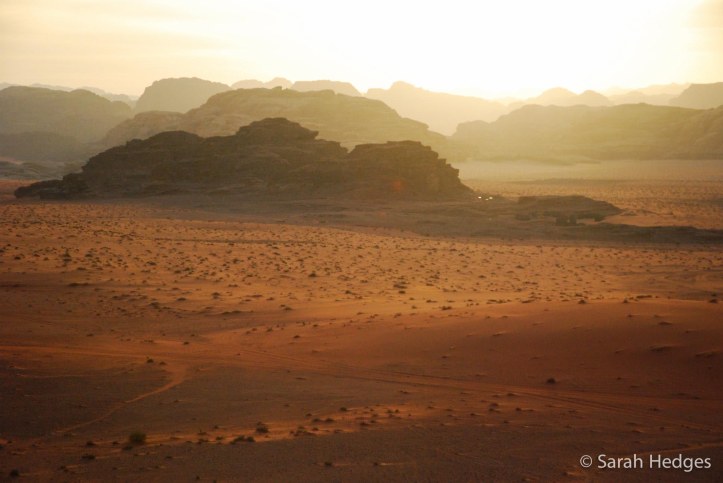 That night, we head into the desert and sleep in one of the Bedouin Sunset camps.

For the next three days, I swap my two wheels for four legs and we explore the desert by camel! Pictured here is our Bedouin guide…

…who sings pretty much non-stop for the entire journey.

Up close and personal with her camel! 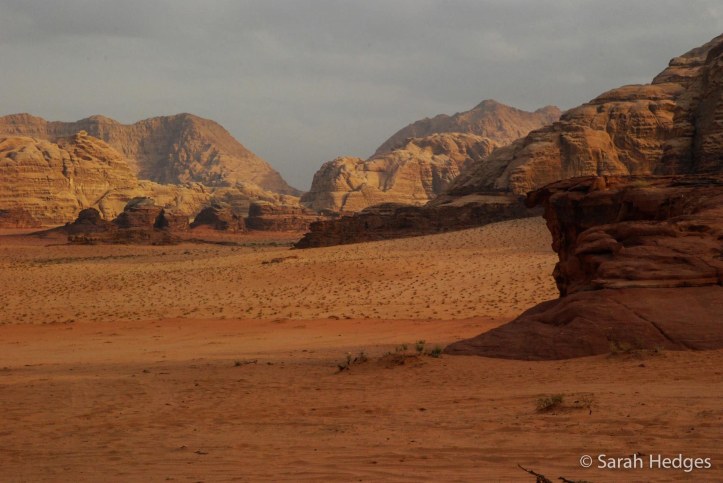 Wadi Rum is stunning, and the camel ride relaxing – but after three days of it I’m thinking I probably prefer to travel under my own steam. I must say though, that for me personally a camel saddle is a whole lot more comfortable than a bike saddle!

From Wadi Rum, Susan and I hitch to Aqaba, where we (of course) go snorkelling. We then take a bus back to Amman. Jordan seems like a country you cycle through rather than make a loop out of.

Our hotel in Amman has the ideal balcony for boxing my bike for the flight home. It is also directly opposite Lauren’s house – another friend made on the Permaculture Design Certificate, and a fellow Aussie.

Susan leaves several days ahead of me, and I spend my final weekend in Jordan with Lauren, her husband Chris and her brother Steve, exploring the eastern desert castles around Azraq. 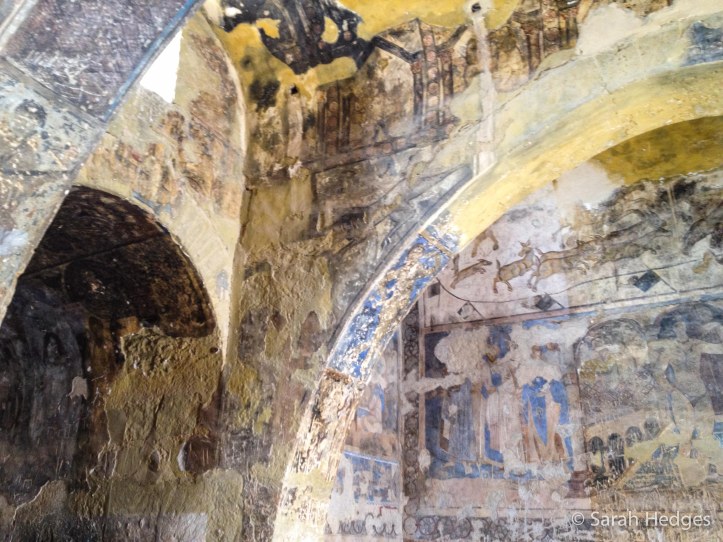 Lauren and Chris. Chris is just back from three months cycle touring in the US, while Lauren (who speaks fluent Arabic) has been working in Amman. The poor guy had his bike stolen in New York, right at the end of his trip!

Check out those doors!

Then finally, it’s time for me, too, to head towards “home”.